skip to main | skip to sidebar

Thru Now, Thru All

Ohmy. Three months since an update! That's actually good, people. People? You there? Wipe the dust off your eyelids.
Long story short: I drove from San Francisco to Maine. I got hired as a camp counselor in Waterford, ME (an hour outside Portland) while I was visiting the other Portland, in Oregon.
The road trip itself was a reward. I love road trips. Long, laborious ones. Northern Cali, Oregon, Washington, Idaho, Montana, Wyoming, South Dakota for 2 weeks—what a blessing those days were—Minnesota, Wisconsin, Illinois, Indiana, Ohio, Pennsylvania, Virginia, West Virginia, DC, Maryland, Delaware, New Jersey, New York, Connecticut, Massachusetts, New Hampshire, Maine. Yes. Stayed with friends and family along the way. You know me, always willing to ask for a favor.
Summer was... earned happiness. My body aches soon subsided. I was so stressed in San Francisco—ulcers, night sweats, body chills, sore lymph nodes—bad news. But as training went on and I embraced the bug bites, the remoteness, the natural beauty, my problems melted away.
First session was an uphill battle. My cabin was a bit rambunctious for the liking, which made for a lot of in-house friction. They were great kids with conflicting personalities, unfortunately. At the midpoint of camp, I struggled to admit to myself that this was a good fit for me, despite all my problems feeling resolved.
Second session proved just the ticket. My cabin was brilliant; they had perfect chemistry, positive attitudes, and an extra layer of maturity. Perhaps it was because summer was primarily behind them and the four weeks meant a winding down rather than a building up. Whatever it was, it was magic.
And the staff. I adore them. I treasure them. I love the catch phrases, the inside jokes, the camaraderie and built-in support system that we were for one another. They are my best friends for all that we shared. What's funny is that, in San Francisco, most of my friends are 10 or so years older than me, but these counselors are just starting college, and some of them are going to be seniors in high school. It's curious how camp found me so late comparatively, but that, in this bubble, none of it mattered. We were a team, and some of those youngsters have known that camp for five or six years (one for 11!). If anything, I was the baby of the group. We all brought something unique to the table, and that made for a fantastic chemistry.
The kids as a whole—the brightest light of all. Their smiles, their energy, their youthfulness, their humor... it all fuels me to this day. They are the largest reason I miss camp so desperately. The kids really leveled me this summer, and taught me what is truly worth prioritizing in life. It's not money, or fame, or appearance, but curiosity. Willingness in the face of fear, celebrated naivety. I may have been the staff photographer—quite possibly the best job at camp—but I was first and foremost a counselor. Here are some of my photos, anyhow (sorry if the sizing is bunk):

Everyone's facebook statuses reek of camp sickness. We're homesick. I wrote a song in the waning days of it all, or rather I rewrote an existing song. Oddly enough, the song, which cites the end of camp and all it has brought us, and how "September's going to feel so long/when we're not where we belong", became some sort of lore for everyone. Sounds like people are going to revive it next summer, too, and forward from there. Cool.
If the cards fell in place, I'd love to go back next summer. That might be the campsick part of me talking. I'm in New York City now, job hunting, and I doubt said cards will fall in said place. I need to get over camp, and soon, because it is significantly hindering my social life. I actually look more forward to my high school friends visiting town than hanging out with my 1980s-born friends. Sheesh. But that's where I am now. I don't feel as though I've taken a step back, but a sidestep, with a new view in front of me. I still want the same things, but in a different light.
And New York. Friends, family. Pray for me. I am so scared. Terrified. Why should this transition be any different from the others? It is. Significantly so. This, as an idol told me, is "the classic fulcrum moment of one's life". Not college, not internships, not camp or your equivalent, but this. I start some temp work tomorrow. Technically I'm a crossing guard and receptionist for a private school on the East Side (christened with a large stop sign!), but kids don't start school until my final day next Friday, so there really isn't anybody to cross. Instead, I'll probably read a lot. Maybe outline some writing. Definitely ruminate. Certainly pray for a phonecall from one of the dozens of employers who has received a resume and cover letter. I'm not being picky, either. I need to lay my groundwork, establish the professional me before I can ever pursue anything further. I am so sick of asking people favors—I'm staying with my friend Abbey for a few weeks, and hopefully only a few weeks. Camp didn't pay so well in terms of green presidents, see...—and soon I hope to dole out the favors as quickly as I once requested them.
Pray for me, please and please. Pray that I can carry camp with me but not over me, and that someone gives me a shot, sooner and not later. The Big Apple does not feel like Adam's Apple just yet. It does feel like a lump in my throat, however. 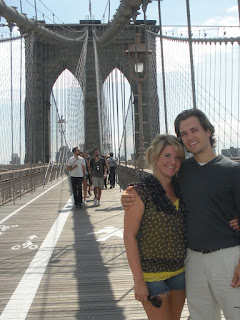 It changes you. It all changes you. Priorities come in and out of focus. And they feel right. People are more important than things. Family is more important than friends. But friends-- friends are a close second. And faith is important. Whether your beliefs are a crock and death is merely a pop while the lights go dark forever, faith is important. It gets you through, spackling the cracks that even the perfect family and collection of friends could not fill.

I want to live forever. But I am not afraid to die. Being unemployed—with no major attachments—is the source of new confidence.

Posted by Hurlywood at 6:02 PM 1 comments

Do you ever wonder how many photos belong to other people's memories, yet encapsulate you in the background? For instance, a while back my friend linked this photo to me. A few of us were in downtown Lawrence and perused the Casbah windowfront. Lo and behold, some guy took a photo, and my pal Tracy saw the result. That's me, red polo. 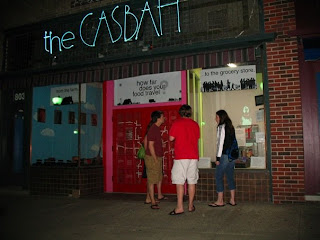 Or take a simple photo of me. Look at all the folks in the background. I know one of 'em, but the others... they're part of my memory, of my computer's disk space, of this moment. 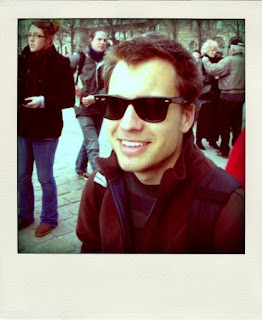 I always thought it'd be cool to look back at old photos and see someone famous, at a time when they weren't famous. Isn't that... Michelle Obama? Well, we are in Chicago... why is she wearing those Kmart mom jeans?

Cannot recall enjoying a lighthearted performance this much in a long while. Amy Adams could do this nowadays, few others.

Unemployment sure has its perks!

After running 3 miles, I could have turned around and headed home to finish my workout. Instead, I meandered through the Presidio in search of Baker Beach. It's west of the Golden Gate Bridge, and hard as heck to find when you're 6 feet tall and tucked inside a forest. Somehow I ended up west of the bridge three times and kept zigzagging back to the east side. It was then that my body said enough, but simultaneously my mind said "run across the bridge". I have never been across it outside of tin and wheels—so I opted to tough this one out.
In a few days I'll be in South Dakota. I'm trying to accomplish things in locales that are unique to those places. Family is in South Dakota. Friends, too. And at KU. I'll be at KU for a few days. And I'll milk those days for the family and friends that fill them. But in San Francisco—and in no other place in the world—you can run across the Golden Gate Bridge if you please.
By the time I made it home, I had logged 12.5 miles. My bunions feel like pig hooves, but the rest of me says "thanks for the day." Except for my skin. It says "you let me burn, you sonuvabitch." Shhhh, meet my friend, Aloe Vera.

Posted by Hurlywood at 8:52 PM 0 comments

Back in the Bayside loft.

I'm thrilled to be here, to be in the city, with family, cushioning the fall from unemployment.
But I feel so... dependent. 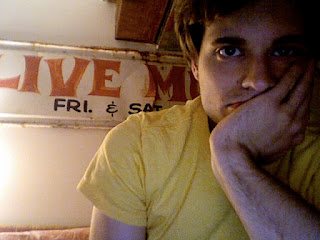 This summer needs some pizzazz. Some intrigue. Some irresponsibility. I smell a large roadtrip. I hope the idea keeps cooking.

World's most inspiring internship: over.

Why was I not more sad about walking away today? I didn't even look back, or take an extra lap around the atrium to soak in the culture one last time. No tears dancing in the duct of my eye. Usually my right eye gives at least a little at significant transitions like this. Dried up, like my bank account.
The happiness and gratitude for this opportunity overshadowed any need to cling to the days past. I've said before that I'm good at goodbyes, and all too used to them, really. So I didn't even bother making many this time around. Either they will notice I am gone, or they will not. And I can't change either one. But I certainly will notice that I am no longer there. And as I ready to move out of my apartment and back to the city, having turned in my security card, signed off my computer one final time, and tucked each thank-you note into its recipient's mailbox, I understand that this transition—which on paper is the most significant of my days—is entirely physical.

Posted by Hurlywood at 3:45 AM 0 comments

The Here and Now